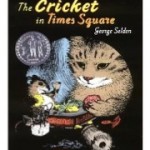 Sophie’s Book Selections: From the Mixed Up Files

When Pipper told Sophie all about her trip on the New York City Metro’s #6 subway to Katz’s Deli and her experience in New York, Sophie thought of two of her favorite books that take place in the Big Apple. The first book is From the Mixed Up Files of Mrs. Basil E. Frankweiler by E.L. Konigsburg, which takes place in the Metropolitan Museum of Art. Sophie said her book group at the library raved about it and made it one of their official book selections. This book gets 5 stars from Sophie! Here’s what Amazon says about it. …  When suburban Claudia Kincaid decides to run away, she knows she doesn’t just want to run from somewhere she wants to run to somewhere—to a place that is comfortable, beautiful, and preferably elegant. She chooses the Metropolitan Museum of Art in New York City. She invites her younger brother Jamie along (he’s got the cash). Once settled into the museum, Claudia and Jamie find themselves caught up in the mystery of an angel statue that the museum purchased at an auction for a bargain price of $250. The statue is possibly an early work of the Renaissance master Michelangelo, and therefore worth millions. Is it? Or isn’t it? Claudia is determined to find out. This quest leads Claudia to Mrs. Basil E. Frankweiler, the remarkable old woman who sold the statue.

Do you have any books to recommend about The Metropolitan Museum or about particular works of art? Please share in our comments.